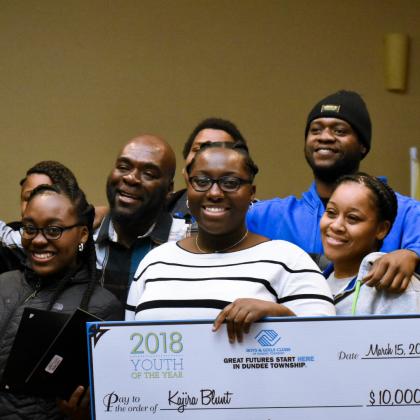 Those words hold deep meaning for 18-year-old Kajira Blunt, who credits the Boys & Girls Clubs of Dundee Township for her growth and success in the last six years.

Since joining the organization, the Dundee-Crown High School senior has overcome adversity, gained self-confidence and developed a voice, she told club and community members Thursday night. She became involved in her community and started serving as a role model to kids. She created a vision for her future and learned the skills to make it a reality.

Blunt’s hard work paid off Thursday when she was chosen out of three finalists as the 2018 Youth of the Year — the club’s highest honor. She was also awarded a $10,000 scholarship, courtesy of the Foglia Family Foundation, which will allow her to attend college and pursue a career in singing and motivational speaking.

“The Boys & Girls Club has really made me rethink life. It’s given me a new perspective. It’s let me know that I’m here for a reason,” said Blunt, of Carpentersville. “I feel like I have something to show (younger club members) and let them know that they can go to college. There are so many different opportunities out there.”

Youth of the Year contestants have to undergo an elaborate application process consisting of interviews and essays, said Amalia Woolf, the club’s vice president of development. A team of judges chose the finalists and winner largely based on their leadership attributes and dedication to the club.

Blunt’s passion is evident in her work at the club’s Perry Elementary School site, where she serves as a role model and leads a step team, a healthy habits program and a singing group, Woolf said. She also collaborated with students and teachers to launch Dundee-Crown’s annual Black History Breakfast, which has been going strong for three years.

“She’s a trailblazer,” Woolf said. “There couldn’t be a better representative of who we truly are, the kids that we serve and the community that we serve.”

Blunt said she’s been working for three years to develop her application in hopes of becoming Youth of the Year. She will head to Oak Brook this April to compete for the state title against the winners from the 25 other Illinois clubs. The state Youth of the Year will advance to a regional competition, with a chance to move on to compete at the national level and visit the White House.

Kajira Blunt will be moving on to the State Youth of the Year Reception, April 18th in Oak Brook, IL 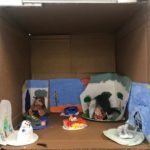